The history of maple syrup

The history of smaple irop

The great history of maple, directly linked to that of Quebec from yesterday to today. The Native American peoples who originally lived in Quebec had many legends to explain the origin of maple syrup. The Indians understood the benefits ofmaple long before the arrival of the settlers.

The custom of harvesting maple sap and heating it to obtain Maple syrup comes to us from the Amerindians.

From the first settlers to maple syrup producers

From various historical sources, we know that between 1535 and 1542, Jacques Cartier and his acolytes were intrigued by a tree that looked like a large walnut tree, but was actually a maple tree. When they cut him off from there'maple water springs from the tree in abundance. When they tasted this water, they found a good taste of wine. According to the statements of the ancients in 1557, a Native American had explained that this tree was called couton.

We will have to wait about fifty years with the arrival of Marc Lescarbot, writer and traveler, to have another testimony on maple sap. He describes seeing Native Americans picking and what he called the distillation of maple sap. He also reports that these Amerindians used hot stones to cook food. Some time later, a missionary told us about the use of maple sap by the Amerindians. He describes this beverage as a strengthening thing. The idea of this drink which restores strength is also present in 1634, described by Mr. Lejeune, who tells us that during a terrible famine the population ate maple bark in order to fight hunger. He compares maple water to a sweet and tasty sugar like honey.

In the 17th century, many testimonies poured in concerning maple sap, thus confirming the slow evolution of the consumption of maple syrup. At the end of the 17th century, and in the 18th century, the first sources on the export of maple sugar in France are more and more numerous. This also coincides with the increase in sugar consumption in Europe, we are nevertheless very far from the generalization of the use of sugar. In fact, at this time, sugar was a product reserved for the notables. We note, however, that the cultivation of sugar cane is booming in the West Indies and Brazil and the demand for sugar continues to increase.

We also learn that King Louis XIV was crazy about sugared almonds. It was a Canadian woman who provided him with the sugared almonds. What is most striking during this Enlightenment is the gaze of science on the virtues of maple sap and maple sugar, consumption is now generalized in New France as attested by biologist Pehr Kalm.

In 1708, Mr. Diereville, explains to us that he studied the tapping techniques of maples used by Native Americans. The Amerindians made a 4-inch incision with an ax to insert a piece of wood in the shape of a trough, the water thus flowing into a container.

Maple water, maple sugar and sugar maple thus obtain their letters of nobility thanks to the studies of numerous scientists. In particular, they are able to explain the natural, chemical and physical process that occurs in maple for the production of sugar. The first studies on the health benefits of maple are also carried out. 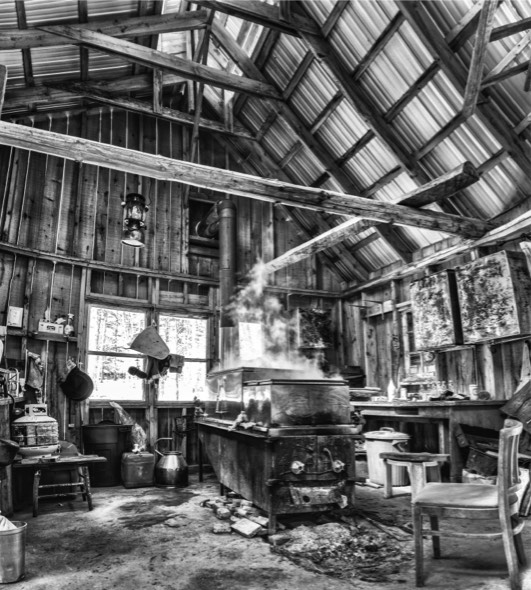 The production of maple syrup

The 19th century will be that of the evolution of maple tapping and harvesting techniques. The production will evolve over the years towards the model we know today. In the early 1950s a revolutionary method was discovered allowing the conservation of maple syrup, at the same time the maple butter and the 540 ml can still in use today the famous cane.

In the early 1920s, maple syrup was classified into 5 categories. During the second half of the 20th century, consumers very gradually replaced sugar with maple syrup.

In the 21st century, innovation and research will discover a new molecule called the Quebecol, a molecule specific to maple syrup.

The phenomenon of casting

Maple transforms into starch sugar formed during its growth by the phenomenon of photosynthesis. This is when this substance mixes with water which is absorbed by the roots of the tree. A slightly sweetened water is then obtained. When spring comes, the water in the roots and the trunk expands and causes strong pressure inside the maple. The alternation of freezing and thawing promotes the flow of maple sap.