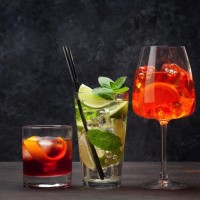 A selection of the best aperitifs in Quebec

We have selected for you a range of aperitifs most appreciated by Canadians. Among the most prestigious you will find the famous caribou which can be enjoyed cold or hot, Canadian mulled wine, maple whiskeys from Sortilège and the essential Coureur des bois maple cream for unique and successful aperitifs. You will also find chic-shock rum...

Quebec's first spiced rumthe Canadian Chic Choc rum: a fabulous blend of boreal spices from the mountains Chic-Chocs in Quebec and a aged canadian rum. Lovers of rum and fans of cocktails will be won over.The sale of alcohol is prohibited to minors, you certify that you have the required legal age and the legal capacity to be able to buy on this website.

Caribou - Product of Quebec FolkloreOf Native American origin, Caribou is an authentic fortified wine from Quebec. A mixture of red wine, alcohols and natural flavors gives an excellent aperitif wine. You can also make hot Caribou, which is very popular in Quebec.

An oatmeal and vanilla flavored vodka Captivating, daring and sophisticated, Alchimia vodka surprises with its uniqueness and smooth texture. Oats give this unfiltered vodka a vanilla flavor and remarkable sweetness. You can consume it over ice, with cardiac tonic or apple juice.

A true Quebec Vodka, double gold medal This vodka is made from rye and distilled 3 times in copper stills, with incomparable purity, a balanced and fine taste. Taste: Powerful and smooth at the same time, with a silky texture Nose: Nose of fresh bread, filberts and toasted almonds Profile: Touch of white chocolate and maple Profile: Distinguished...

An exceptional Quebec gin: Akenes Inspired by the rains of samaras falling from the maple trees and the passion of the Nokomis house for the harmony of flavors.Gin Akenes is made from a maceration of carefully selected spices, herbs and samaras.A fresh and classic taste of a good gin offering a balanced amalgam of spices. A final, with the sweetness of...

Gin north of Le Commun Infused with six boreal herbs from northern Quebec, Ungava gin offers a truly unique taste. These rare boreal herbs are hand picked, dried and then macerated for five weeks. The result is an extraordinary gin, a real feast for the senses with its unique color, its 100 ingredients% natural.

Gin that comes from cold Quebec Gin de Neige reveals its refined and unique taste thanks to a selection of aromatics and wild herbs from Quebec and the addition of a little Cider de Glace Neige.

The Crème de Cassis awarded several times A bright blackcurrant color with purplish and purple reflections, it stands out on the nose with aromas of red fruits, and a peppery finish. With notes of very ripe fruit followed by a pronounced sugar, and counterbalanced by alcohol. It is very smooth. The sale of alcohol is prohibited to minors, you certify...

The top of the range maple syrup whiskeysthe Sortilège canadian whiskey from the range Prestige is the marriage of a peated whiskey Canadian age for a minimum of 7 years in oak barrels and a Maple syrup pure from the first pour from Quebec. Undoubtedly the best whiskey in the Sortilège range. For the great lovers of whiskey, you will not be disappointed...

The unique Sortilège whiskey cream with maple syrupThe cream of whiskey spell has the same composition as the liqueur of Whiskey Sortilège The Original : an assembly of Maple syrup and Canadian whiskey with a touch of sour cream. The authenticity of the Quebec terroir gives a perfect balance between the particular flavor of Maple syrup and the power of...

Coureur des Bois cream at the best priceThe maple cream Coureur des bois : a fabulous blend of Maple syrup, grain alcohol and rum with a touch of sour cream. A perfect balance between the particular flavor of Maple syrup and the power of grain alcohols and rum as well as the sweetness of the crème fraîche. Lover of harmonious blends soft and light you...

The bottle of Spicebox Original Whiskeythe spicy original canadian whiskey is of first quality aged in bourbon barrels for a minimum of 3 years. Thanks to a specific extraction process that brings out the flavors of spices and vanilla. It is recognized as one of the tastiest spirits on the market!Taste it, you will be won over by its charm.

The Sortilège en Trio range of whiskeys at the best priceFind this discovery pack of the range Whiskey spell with maple syrup comprising: Sortilège Original Whiskey in 700 ml Whiskey Sortilège Prestige 7 years old in 750 ml Sortilège whiskey cream in 750 ml The sale of alcohol is prohibited to minors, you certify that you have the required legal age...

Large box of Sortilège bottle at reduced priceTake advantage of the reduction for the purchase of 5 bottles of Sortilège L'Original Whiskey. A daring blend of Maple syrup and Canadian whiskey. The sale of alcohol is prohibited to minors, you certify that you have the required legal age and the legal capacity to be able to buy on this website.

In the Quebec tradition, you can eat several types of appetizers during cocktails to satisfy everyone's taste. Here is a list of ranges of Canadian appetizers that you can put on your table to surprise your guests.

In Canada, drinking caribou wine has become a classic on the tables at cocktail parties of all kinds. Ancient recipes have been adapted with this type of drink, and this has given it the place of aperitif wine.

Caribou is like punch thanks to its recipe. Its main components are red wine and strong alcohol. The percentage of wine must be greater than or equal to 75 % and the 25 % remainder revert to alcohol.

Chic choc rum is a range of delicately crafted spirits. The chic choc is a reference to the Gaspésie peninsula. This is an infusion of Nordic spice bouquet combined with a 3-5 year old rum. The spices used are quite rare too, such as boreal spices, dune peppers, etc.

Its amber color close to that of copper with a smell of cinnamon mixed with honey makes this rum a unique spirit.

Crème de cassis is a liqueur made from the blackcurrant berry. With its blood red color, it is a very popular aperitif in Canada.

The Canadian vodka "the boiler room"

Boiler room is a typical Canadian vodka made from rye. It is distilled three times in a row in order to have a powerful taste, ideal for an aperitif.

Quebec ice cider is a real treat and has a special taste. It is the mixture of an apple fermented under the action of cold. The apples are picked after the first frosts. The taste is similar to a stewed apple, with a perfect balance between sweetness and unequaled acidity, hence its undeniable place during aperitifs.