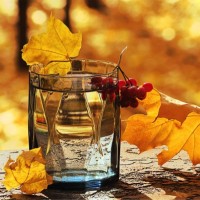 All beverages from Canada

Here you will find a selection of Canadian drinks. The famous artisanal sodas Bec-Cola, the 100 drink% organic at Maple syrup. The carbonated drink without caffeine.

You can also choose the concentrated juice and syrup cranberry and of blueberries wild.

The best of Canadian cranberries Discover pure cranberry juice without added sugar, the best quality made in Quebec. Certified organic. Enjoy it plain, mix it with water or add it to your smoothies. With a 500 ml bottle you get 2 Liters. Basic mix with water: 1/4 cup cranberry juice plus 3/4 cup water.

Turkey Hill Superior Tea with Maple IcewineThis tea is made from the famous canadian ice and maple wine. A taste of grapes with hints of fruit will surprise you.The box is made up of 20 sachets of 2g or 40g.

Discover Cranberry Bay The Cranberry is a plant that grows mainly in Canada. The small red berries are appreciated for their health effects and their taste qualities.This drink made from concentrated cranberry juice to be diluted will bring a fruity and fresh note to breakfast to start the day, during a meal or during the aperitif.It has health benefits,...

Discover Cranberry Bay The Cranberry is a plant that grows mainly in Canada. Its small red berries are appreciated for their effects on health and their taste qualities.This drink made from concentrated cranberry juice to be diluted will bring a fruity and fresh note to breakfast to start the day, during a meal or during the aperitif.It has health...

Black tea with blueberries from CanadaSuperior black tea from Ceylon wild blueberry. the blueberries is a bay found in North America. It is often compared to the blueberry which is its European cousin. However, its taste is slightly less sweet. The box is composed of 25 sachets of 2g or 50g.

The Crème de Cassis awarded several times A bright blackcurrant color with purplish and purple reflections, it stands out on the nose with aromas of red fruits, and a peppery finish. With notes of very ripe fruit followed by a pronounced sugar, and counterbalanced by alcohol. It is very smooth. The sale of alcohol is prohibited to minors, you certify...

Organic Cranberry and Maple Syrup Soda You will enjoy Bec-Cola soda made with organic ingredients without caffeine and phosphoric acid. The alliance of two iconic flavors of Canada, cranberry and maple syrup.

Maple water: Ideal for athletes and hydrationMaple organic maple water Maple 3 hydrates twice as fast as water, an ideal drink for the active and the health conscious. Maple water is delicious in taste and very low in calories.

Tonic 1642 - SUBTLE - NORDICA tonic water with aromas of spruce and lime which give it a perfectly balanced bitterness, without quinine. With its slightly sweet taste, it enhances your favorite gin.In a 275 ml glass bottle

Tonic 1642 - SUBTLE - NORDICA tonic water with aromas of spruce and lime which give it a perfectly balanced bitterness, without quinine. With its slightly sweet taste, it enhances your favorite gin.In a 200 ml glass bottle

The good maple syrup tea at the best price Black tea with the great taste of Canadian maple syrup. A blend that is both soft and robust. A maple flavor with accents of cream crepe. Presented in a box of 12 luxury pyramid tea bags. (guaranteed without plastic) The tea bags are compostable and biodegradable. Leave to infuse for 3 to 5 minutes in water...

The typical non-alcoholic drinks of Canada

All over the world, each country has its own drink made from its natural ingredients. Particularly in Canada, she has a drink that is very popular in her country and indeed everywhere else. Indeed, Canadian beverages are exported and highly sought after on the shelves of supermarkets. Learn about these Canadian drinks in this article.

Bec Cola is an emblematic drink for Quebecers. It symbolizes the sympathy and benevolence of the local inhabitants. It even reflects Canadian pride. This Quebec drink is an organic product unlike other soft drinks and sodas normally found on the market.

Among its particularities, we can appreciate:

Cranberry juice and its concentrate

The cranberry comes from North America. It is cultivated for its richness in antioxidants and vitamins thanks to the presence of polyphenols.

Canadian cranberry juice comes from a 100 farm % canadian with a recipe 100 % biological. It is composed of Cranberry 100 % organic, no water or added sugar.

It is suitable for all types of people including diabetics and people with high blood pressure.

Made from Canadian blueberry berries, this syrup is blended with maple syrup for maximum taste.

It's a recipe 100 % organic with a unique flavor. It is served during breakfast or as an accompaniment to desserts.

They are unique drinks in the world. They are only produced in Canada. Maple is a tree native to Canada. Maple nectar is obtained from the sap produced by the sugar bush each spring.

The particularity of herbal tea and maple tea is that they are all of natural origin and without added colorings.