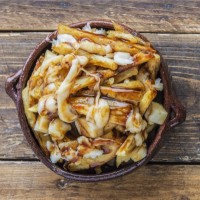 Poutine: the emblematic dish of Quebec

One of Canada's most popular street food, poutine is the quintessential Canadian dish, consisting of fries, gravy and cheese curds. The most popular variation in Montreal features crispy cheese curds and a special Quebec sauce that gives your meal an extra kick. In just one taste, you can tell these two ingredients are as close to magic as it gets.

Discover the poutine sauce in a St HubertFor gourmets! Try the mix at poutine sauce rotisseries St Hubert. This preparation will transform your homemade poutines into a real delight. You just have to add water. Presented in a 52g sachet allowing you to prepare 600ml of real poutine sauce. 1 sachet for approximately 4 people.

Buy poutine sauce at the best price For gourmets! Try the mix at poutine sauce rotisseries St Hubert. This preparation will transform your homemade poutines into a real delight. You just have to add water. This pack of 10 allows you to benefit from advantageous rates. Presented in a 52g sachet allowing you to prepare 600ml of real poutine sauce. 1...

Quebec poutine and its history

From the word poutine, it is clear that this meal is a Quebec invention. Marie-Rose Dubuc, a descendant of two French colonizers, invented this dish in the late 1950s to use up old bread and cheese. She created it in her grandfather's restaurant in Sainte-Foy, Quebec.

Ms. Dubuc has been dubbed the "queen of poutine" because she is credited with creating the dish that has become Canada's national dish. Whatever name you give it, this concoction is ubiquitous in Quebec and has been made famous in countless movies and TV shows.

Quebec poutine sauce is a sauce made with tomatoes, onions, spices and butter. The recipe for this sauce was invented in 1957 by the owner of the Quebec restaurant Le Lutin. The recipe was distributed throughout the province and, within a few years, it became one of the most requested recipes in restaurants. Today it is available all over the world.

In our time, you can find abundant poutine recipes using different sauce ingredients. Among these new innovative recipes, we have maple poutine sauces in our gallery. This delicious maple sauce is very versatile and can be used in many recipes other than poutine. If you're looking for an original way to use it, try it on different foods like sandwiches, hot dogs or cheese curds. You can also serve it as is with garlic bread or even pasta.