St Hubert , also known as Les Rôtisseries St Hubert Ltée, is a Canadian company that has been around for over 70 years. It operates as a franchise system with over 120 traditional and express rotisseries in Canada. The company distinguishes itself by being the first Canadian fast food chain to sell its own roast chicken. It is one of the few independent, vertically integrated poultry companies in North America to produce fresh chicken for its restaurants from certified organic, free-range flocks.

History of the St Hubert brand

In 1952, the founders of St Hubert , Hélène and René Léger, opened their first restaurant in Montreal, on rue Saint-Hubert. Over the years, St Hubert continues to open new rotisseries in Quebec, Ontario and Newfoundland. It introduces new products such as chicken wings, St-Bernardin beers and vinaigrettes.

St Hubert enjoys international acclaim across Canada and has featured on a network of Canadian Broadcasting Corporation (CBC) stations since 1964. In 2008, Forbes ranked them among the top 10 global franchises. With the evolution, the St Hubert brand began to produce and also distribute food products in grocery stores.

St Hubert now has restaurants in Quebec, Ontario and New Brunswick. They offer different product lines around the world with 31 million meals per year; including chefs like Forever Chef, A Table, Kerr's, Allan, Major Gourmet, SuwongD and other products. The restaurant also offers many products for sale in its grocery stores. These include packages of smoked bacon poutine sauce and barbecue sauce. The expressions of St Hubert are based on these selected foundations:

Quality before speed: To ensure the quality of its products, St Hubert has its own culinary team which includes chefs and cooks who have received certifications recognized by the Quebec Culinary Federation. It works closely with meat suppliers to ensure the freshness of its products.

A generous portion for a fair price: This allows customers to share their meal with family or friends or save leftovers for another day. 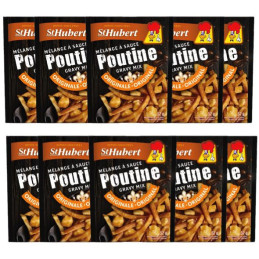 Buy poutine sauce at the best priceFor gourmets! Try the mix at poutine sauce rotisseries St Hubert. This preparation will transform your homemade poutines into a real delight. You just have to add water. This pack of 10 allows you to benefit from advantageous rates.Presented in a 52g sachet allowing you to prepare 600ml of real poutine sauce. 1 sachet... 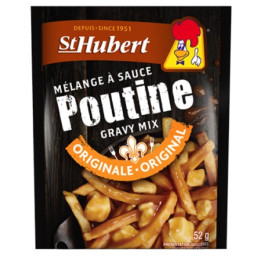 Discover the poutine sauce in a St HubertFor gourmets! Try the mix at poutine sauce rotisseries St Hubert. This preparation will transform your homemade poutines into a real delight. You just have to add water. Presented in a 52g sachet allowing you to prepare 600ml of real poutine sauce. 1 sachet for approximately 4 people.